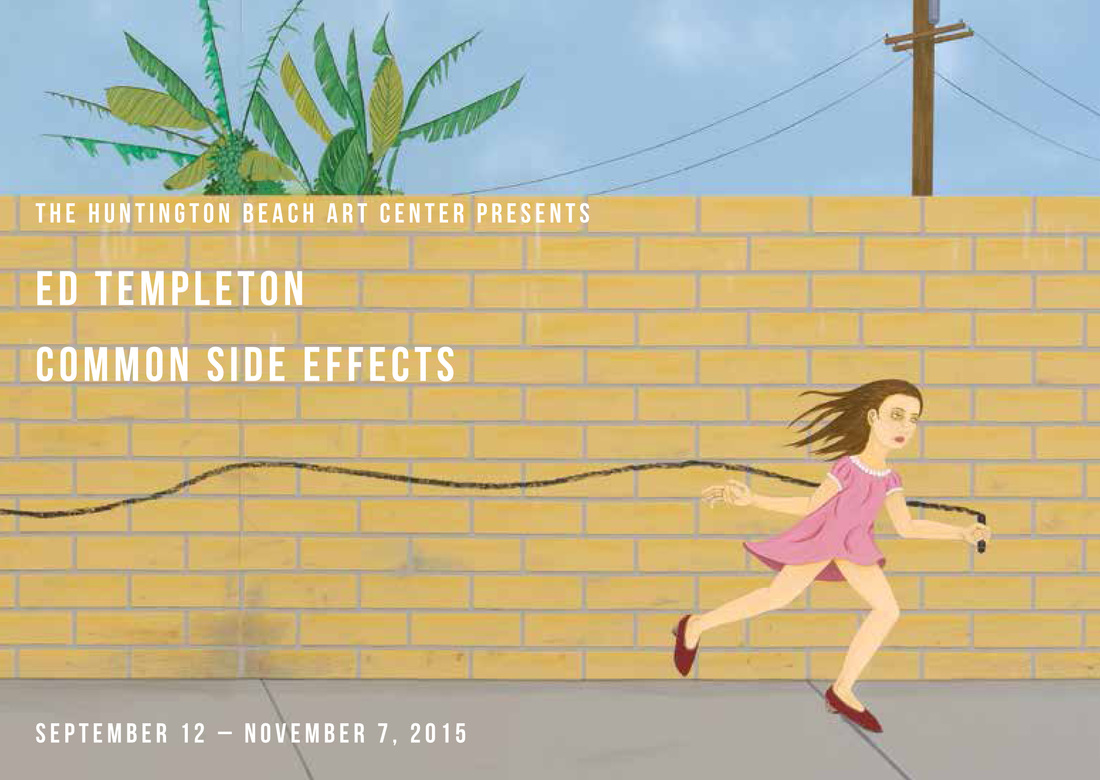 Ed Templeton (born 1972) is an iconic figure in the subculture of skateboarding. His paintings, photographs, drawings, and mixed-media installations take their inspiration from the skate community he is a part of and the suburban environment in which he lives. Templeton is also a two-time world-champion professional skateboarder since 1990, and the creator of Toy Machine skateboard company. His work has been exhibited at MOCA, Los Angeles, Palais de Tokyo, Paris, S.M.A.K. Museum, Belgium, Ernst Muzeum, Budapest, Kiasma Museum, Helsinki, Kunsthalle, Vienna, and BALTIC Centre for Contemporary Art, UK. He lives and works in Huntington Beach, California. Known both as a painter and photographer documenting the people and culture surrounding the iconic pier in Huntington Beach, Common Side Effects is a survey of old work along with new paintings and drawings directly inspired from this emersion into his coastal suburban environment. Common Side Effects extends Templeton’s diaristic observances into a compelling visual analysis of the concrete experiences, perceptions, and idiosyncrasies of this hyper-local existence. “I'm obsessed with people watching, and of course the whole circus of humanity down at the beach and on the pier is an amazing place for that. The bikini girls, the old men in rascal scooters, the drifters and local denizens.”

His photography is done in the traditional documentary vein, shooting only with film (except for his popular instagram feed @ed.templeton which features images shot primarily with an iPhone) to capture the essence of daily life surrounding the pier. With an unflinching eye to both the beauty and the underbelly of his hometown, he depicts both aspects without judgement by both celebrating and immortalizing the eccentric characters that make up this community. Templeton’s stylized figurative paintings are deceptively simplified: uncomplicated displays of contemporary portraits – hybridized composites of people Templeton sees on his daily walks about town - inhabiting their own private worlds. He constructs suburbia as paradise, with visions of perfectly manicured lawns, pretty girls-next-door, and idyllic beach views, all within the walls quietly demarcating people off from one another.

"As a young boy visiting my grandparents (who lived in Huntington Beach), I would always be able to tell when we were close to their house because suddenly there would be mile after mile of road where it's just the street, a sidewalk, then a wall surrounding a tract of homes. I would exclaim, 'We are in Huntington Beach now!' and they would ask me how I knew and I would respond, 'Because of the walls.'" Ubiquitous to the point of being invisible, these walls and fences have become a recurring theme in his work. "What is hidden behind them, and the false front they represent is interesting to me. Behind all of these nicely painted houses and planned communities are humans and all the thorny issues that come with them." Templeton positions himself as a voyeur looking into the world he inhabits; we the viewer are as just as complicit in enjoying this semi-confrontational gaze.

“These recent paintings are a culmination of years of looking at the place where I live and the peculiarity of it. I have travelled all over the world and there is no place as strange as Huntington Beach.” -Camille Weiner

Nolan Hall (Born 1985) is the team manager for the Vans surf team, a job that has him travelling around the world with an amazing cast of people. His photographs are pulled from his journeys documenting the places and cultures he visits and the extraordinary people he’s surrounded by. His work has been featured in numerous publications worldwide. He is represented by Paul Loya gallery, Los Angeles.

Deanna Templeton (Born 1969) is a photographer born and raised in Huntington Beach who spent her teenage years filled with angst going to punk shows all over the southland. Her photography is a mixture of candid street scenes and portraits of people she finds a personal visual connection with. Her work has been shown extensively at galleries in the US and Europe, including solo museum exhibitions in Germany and Holland. She has 3 books of her work published, along with numerous zines. She is represented by Fifty One Fine Arts gallery in Belgium.

Devin Briggs (Born 1990) is a videographer for Captain Fin and a social media manager for Vans Surf who was born and raised in Huntington Beach. Informed by his lifelong participation in the skateboard, surfing and graffiti scenes of southern California Devin’s photography exposes the absurdities of life in HB with poignant visual observations. His work has been exhibited at galleries in the US and Australia and has been featured in numerous magazines and zines.

Billy “Soncho” Williams (Born 1994) was born and raised in Huntington Beach. He has recently returned home from a stint as a bike courier in San Francisco and is now working part time at a clothing store. Billy (Also known as Captain Soncho) has been lurking around HB shooting photos for years. He started shooting in his freshman year of high school and has never stopped. (He is the only one of this group that shoots with a digital camera as well as film.) He shoots his local skate and music scene with enthusiasm. He has been included in gallery exhibitions in California, and has many zines featuring his photography.

Grant Hatfield (Born 1986) is a content contributor to Vans Skate and is a vintage clothing reseller based in Long Beach. For the last 10 years (when he’s not surfing or skating himself) he has been documenting the skateboard subculture and life in southern California with a sharp wit and an eye for the comic moments of daily life here. His work has been shown in galleries in the US and Australia and has been published in numerous zines and magazines.