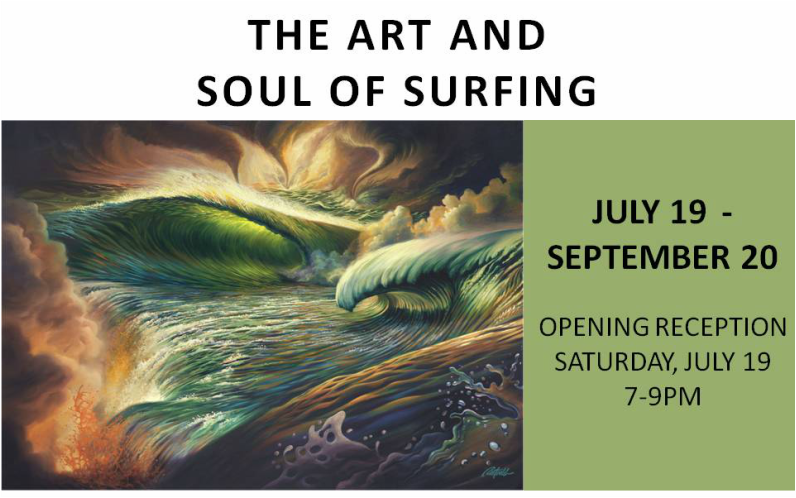 The exhibition honors the beauty and inspiration of surfing and the intimate relationship of the artist/surfer and the ocean.
The artists featured in the exhibition have successfully captured their core love of riding waves. The influence of their pure “surfer stoke”, the addiction that is surfing, has driven their careers and their artistic lives.
The exhibition features works of art from the most legendary surf artists in recent history, including the “Godfathers of Surf Art”: John Severson, Rick Griffin, Bill Ogden and John Van Hamersveld. In addition, current day legends Rick Rietveld, Ken Auster, Kevin Short, Wade Koniakowsky, Ashton Howard, Melinda Morey, Kevin Ancell, Sandow Birk and Bill Stewart are represented.
The exhibition is co-curated by Phil Roberts and Patrick Servedio, who have included a new generation of emerging artists: James Finch (Disney Production designer for “Frozen”), Lori Gilbert, Sam Bernal and Josh Serafin.
Held in conjunction with the US Open of Surfing, The Art and Soul of Surfing is generously presented by VANS.

Each artist employs a uniquely different approach. Ken Auster, a plein air painter, is known for his deft use of color and his simple but beautifully structured compositions. James Finch, an animator for Disney Studios and an Oscar award winning designer for his work on the movie Frozen, is recognized for his attention to detail, choice of color palette, and his eye for composition. Lori Gilbert is a visionary, imaginative illustrator, painter and designer whose goal is to ignite the imaginations of all who view her work. Melinda Morey is a painter, printmaker, video and installation artist, whose work has been commissioned internationally, from Santiago, Chile to Tokyo, Japan. Her paintings and installations are influenced by working on a grand scale, as well as by the performance aspect of her livelihood as a dancer and her lifelong relationship with the ocean. Rick Rietveld, painter, illustrator and co-founder of Maui and Sons popular surf wear company, says of his work –“my art tells stories of better lands, fairer seas, adventure, spirituality, beautiful women – but the story’s ending is left up to the viewer”. Kevin Short, an internationally collected painter whose works are exhibited in museums around the world, was recently honored by the prestigious Carnegie Art Museum with a retrospective of his paintings that explore light and glare. Bringing these talented artists all together, moderator and curator Phil Roberts has been called “a modern day Da Vinci”, as he is best known as a master painter. Yet his strongest talents lie in his inventions, figure drawing and sculpture. The evening promises to engage and delight the audience with talk and tales from diverse perspectives.
The Art and Soul of Surfing exhibition and related events has been generously sponsored by Vans.